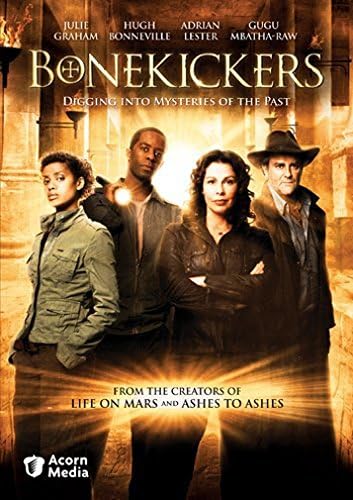 Bonekickers, like Raiders of the Lost Ark and its sequels, is a dramatic series about sharing the excitement archaeologists feel when they unearth treasure, but it has a more academic side that lends it credibility. This British serial, set in the scenic town of Bath, stars a team of scientists from the local university who, during each episode, discover historical artifacts that shock their community. While the discoveries are distinctively tied to actual European history, Bonekickers is gripping and accurate enough to keep American viewers invested in the stories. Dramas among the team, headed by renegade professor Gillian Magwilde (Julie Graham), relate to their projects and are exacerbated by public meddling. Dry wit and uncanny occurrences add humor overall, making for a series that does drift into melodrama but for the most part feels educational and funny. The "bonekickers," including Gillian, her trainee Vivian (Gugu Mbatha-Raw), Professor Gregory (Hugh Bonneville), and Ben Ergha (Adrian Lester), sleuth through mud and ancient tomes for relics and literary clues to support their outlandish cases. The first episode, "Army of God," begins when a construction team finds medieval Middle Eastern coins in a lot where a park is to be built. From here, one sees how the team deduces that Christian soldiers passed through England with valuables that sparked Holy Wars during the already-heated Crusades. Historical reenactments make tales of the past clearer and are tied to a concurrent narrative about Evangelical Christians in contemporary life. In episode 3, "The Eternal Fire," the real-life drama is more riveting than the archaeological find. Earthquakes under a Roman bathhouse in Bath lead Gillian and Ben into the catacombs, but the emphasis is on their personal relationship as they face danger. While each segment features digs that reveal British history, it is not until episode 6, "Follow the Gleam," that one really understands the links between each show. In "Gleam," the viewer gets to know stoic Gillian better when her obsession with Excalibur is exposed during the discovery of a possibly Arthurian round table. Because one begins to understand Gillian's wish to avenge her mom's untimely death, Bonekickers becomes much less about adventure and more about how and why humans seek answers on personal quests. From here, the show takes on a deeper dimension. --Trinie Dalton

Digging into mysteries of the past

From the creators of Life on Mars and Ashes to Ashes

Past and present meet with explosive results in this British drama series called "a bit of Doctor Who fantasy, hints of a Da Vinci Code riddle, and even elements of CSI" (The Times, U.K.). Led by the fiery Dr. Gillian Magwilde (Julie Graham, At Home with the Braithwaites), an intrepid team of archaeologists finds mud, blood, and death-defying adventure when they start digging.

DVD SPECIAL FEATURES INCLUDE behind-the-scenes segments for each episode.