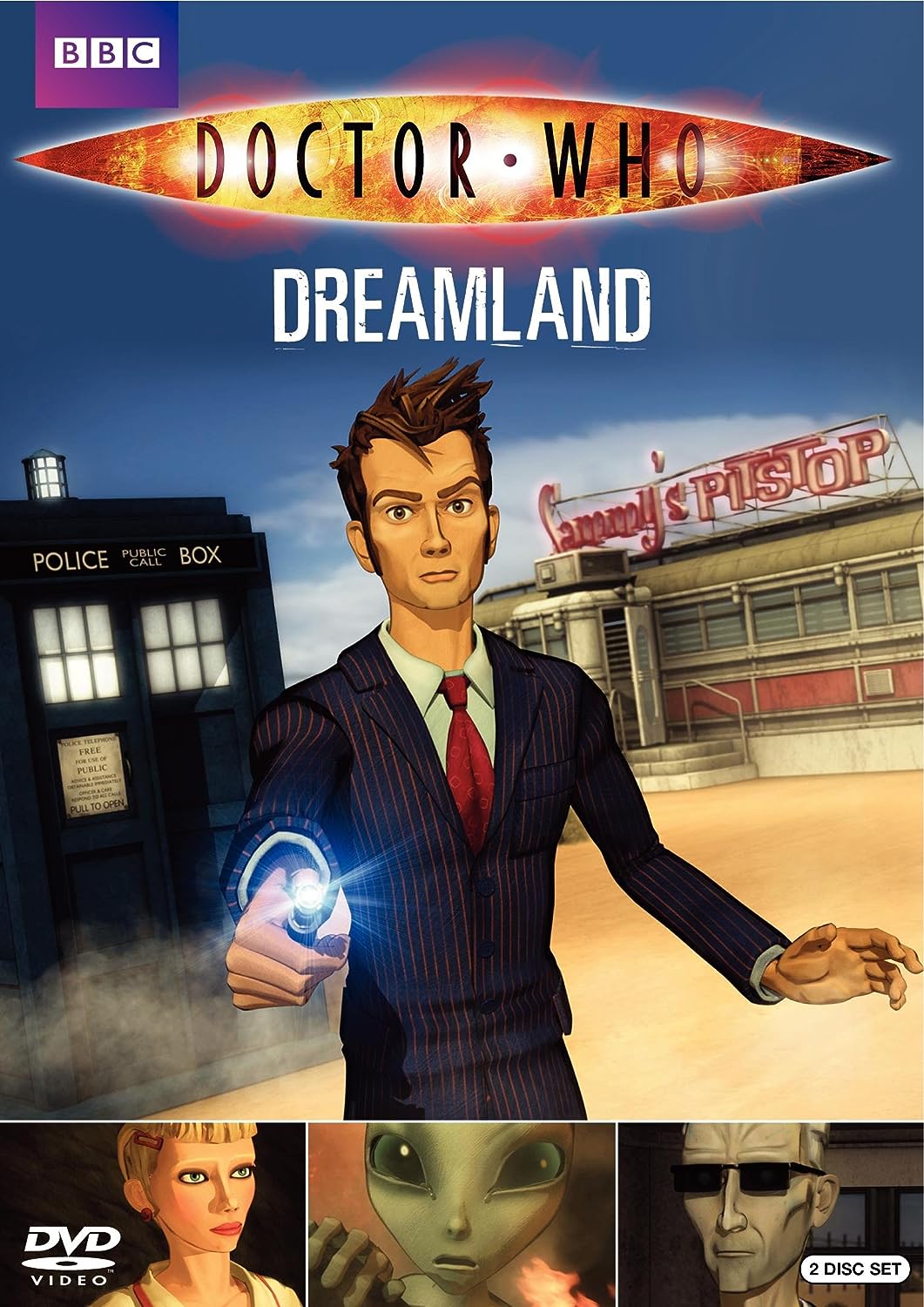 David Tennant's tenure as the Time Lord Doctor Who gets a brief extension with the energetic animated adventure "i"Dreamland, which was broadcast on the official "i"Doctor Who website in 2009. As we learn in the 45-minute feature, "Dreamland" is code for the infamous Area 51, where aliens have reportedly been spotted, and where Tennant's Doctor finds himself in the middle of an invasion by the insectoid Viperox. With the help of locals Cassie (Georgia Moffett, the daughter of Fifth Doctor Peter Davison) and Jimmy (Tim Howar), the Doctor must put a halt to the Viperox's world domination plans while avoiding a war-mongering US Army general. Dreamland benefits from a solid, action-filled script by Phil Ford (who penned the live-action Tennant serial, The Waters of Mars) but is hampered throughout by its clunky CGI animation, which works wonders with backgrounds but makes Tennant's Doctor and his companions look awfully lifeless. Still, it's better than the dreadful artwork for the previous animated offering, The Infinite Quest, and should please dedicated followers of the Doctor. The two-disc set includes a second disc titled Doctor Who's Greatest Moments, which is comprised of clips from the Tennant years, as well as interviews with all the major participants (and a few surprises, like Sir Derek Jacobi), and lumped into themed categories (The Doctor, Companions, Enemies). Amusingly enough, the featurettes, which each clock in at 60 minutes, are longer than the main feature itself. "i"--Paul Gaita

Doctor Who: Dreamland finds the Doctor (voiced by David Tennant) hooked up with two new companions - Cassie and Jimmy - and pits him against a new alien race, the monstrous Viperox, led by Lord Azlok. Dry Springs, Nevada, 1958. During a visit to a local diner, the Doctor befriends a young waitress, Cassie, and her friend Jimmy. When the Doctor examines an extraterrestrial artifact, he draws the attention of a mysterious man in black, an alien warrior and Colonel Stark, commander of Dreamland - the military base also known as Area 51. So begins a momentous mission for the Doctor, who with the help of his new companions and Jimmy's grandfather, Night Eagle, sets out to rescue the stranded alien, Rivesh Mantilax, and his wife, Saruba Valek, from the clutches of the American military - and from the terrifying alien race, the Viperox, led by the ruthless Lord Azlok. Also includes 3-part retrospective Doctor Who Greatest Moments: The Doctor / The Companions / The Enemies.