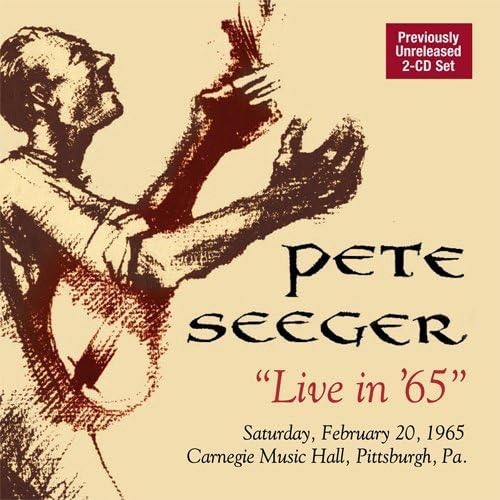 Pete was an icon to the young folk singers of America at the time of this 1965 show at Carnegie Music Hall in Pittsburgh. The master tapes of this riveting set have been cleaned up and remastered for this 2-CD release; he sings Turn! Turn! Turn!; Where Have All the Flowers Gone; Greensleeves; If I Had a Hammer; He Lies in an American Land; Guantanamera; Oh Susanna; Old Joe Clark 31 tracks!

Only hermits or long-shipwrecked castaways may be unaware of the resurgence in the public consciousness of one of the 20th Century's true icons, folk singer Pete Seeger, in this new millennium. In the last decade, Seeger has received just about every humanitarian award he didn't already earn, performed for an audience of hundreds of thousands at President Obama's inauguration ceremonies, received a Grammy for his most recent CD (At 89) and reached new generations through the musical endorsement of Bruce Springsteen. Now comes Live in '65, a new 2-CD recording of a previously unreleased, sonically updated Seeger concert at Pittsburgh, PA's Carnegie Music Hall in February 1965 that encapsulates 90-year-old Pete's lifelong mission to entertain, educate, and galvanize listeners through the power of contemporary and traditional music of all cultures and his own contagious commitment to making a difference.

Live in '65 documents a "typical" Seeger show at the midpoint of a tumultuous decade in which civil rights, the Cold War, and generational conflicts were aflame. Seeger uses his inclusive repertoire to unify his audience with the perspective of songs of older but similar conflicts ("Peat Bog Soldiers," "Los Cuatro Generales," "The Freedom Come-All Ye"; this is Pete's only recording of the latter song, which he regards as highly important); folk classics ("Oh Susanna," "Old Joe Clark," "Greensleeves"), modestly racy tales of bawdy houses ("Queen Anne's Front"), conjugal relations ("Never Wed an Old Man," "Uh, Uh, Uh"), and the socioeconomic value of horse turds ("Manyura Manya"); inspired versions of fellow ex-Weaver Fred Hellerman's soothing "Healing River," Bob Dylan's apocalyptic warning, "A Hard Rain's A-Gonna Fall," and Woody Guthrie's anthemic "This Land is Your Land"; and Seeger's own portfolio of unforgettable original or adapted songs ("Where Have All the Flowers Gone," "Guantanamera," If I Had a Hammer," "The Bells of Rhymney," "Turn! Turn! Turn!").